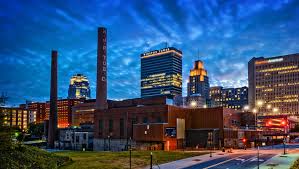 Winston-Salem is a city in and the county seat of Forsyth County, North Carolina, United States. With a population of just over 250,000 it is one of the largest cities in North Carolina.  inston-Salem is home to the tallest office building in the region, 100 North Main Street, formerly the Wachovia Building and now known locally as the Wells Fargo Center.

Winston-Salem is called the "Twin City" for its dual heritage and "City of the Arts and Innovation" for its dedication to fine arts and theater and technological research. "Camel City" is a reference to the city's historic involvement in the tobacco industry related to locally based R. J. Reynolds Tobacco Company's Camel cigarettes. The city has quickly become known for its Innovation Quarter and focus on the biotechnology industry, with industry leaders such as Wake Forest University researching and creating products that will solve problems in today's world, and for the future.

In 2012, the city was listed among the ten best places to retire in the United State by CBS MoneyWatch. Winston-Salem has seen a surge in growth and urbanization in the downtown area with hotels, restaurants, and apartments under construction. In 2017, the New York Times and the Wall Street Journal ranked the city second in their lists of the most livable downtowns in America. Winston-Salem tied with Charlotte for the highest growth in small business. WalletHub ranked Winston-Salem the third most affordable large city to start a small business.

Winston-Salem Sister City's Mission is to promote peace and understanding through global partnerships focusing on the arts, education, business, and community development.